Ringed seals are the smallest of all seals and live primarily in the Arctic Ocean. They are able to dive as deep as 300 feet and stay under for up to 45 minutes. They blow bubbles before surfacing to check for Polar Bears, their main predator. The seals use their sharp claws to make breathing holes in the thick ice.

All populations of Ringed Seals are expected to be adversely affected by climate change because of dependence on sea ice and snow dens for breeding, protecting pups, moulting and resting. Early warming causes pups to separate prematurely from their mothers. As sea ice declines, other threats are fisheries by-catch, increased shipping, tourism and development. Seals are vulnerable to disease from heavy concentrations of pollutants that have accumulated in the Arctic food web.

Tufted Puffin
Tufted Puffins are threatened by sea level rise and storm surges which destroy habitats and breeding areas. In some areas of North America warming seas are causing the fish that the Puffins feed on to migrate farther north, making it difficult for them to find adequate food. Other threats are entrapment in fishing nets, oil spills, pollution, ingestion of plastic, human disturbance of breeding colonies and introduced predators such as rats and foxes.

Beluga
Belugas live in Arctic and Sub-Arctic waters. Impacts from climate change include: an increase in ship traffic as sea ice declines, oil exploration and extraction, fisheries by-catch, and disruption of the food web. As Arctic waters warm and currents change, the Humpback (a competitor) and the Orca (a predator) may move north and stay longer. Some Beluga populations are also threatened by hunting, pollution and habitat loss. 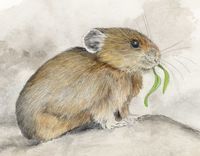 Hawksbill Sea Turtle
Climate change may affect Hawksbill Turtles in various ways because they live in different habitats at different stages of life: open ocean, beaches, lagoons and coral reefs. Rising sand temperature of nesting beaches produces more females and other abnormalities in baby turtles. Adults live primarily in coral reefs—threatened by rising ocean temperature and acidity. Since ancient times the Hawksbill has been exploited for its shell. They are also threatened from fisheries by-catch, development, and a high sensitivity to oil spills. The population has decreased by an estimated 80% in the last 100 years.
Ringed Seals are effected by climate change because of:
Snow Or Ice Decrease 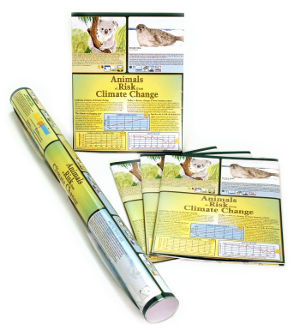