Even though they can't fly, to avoid predators Adélie Penguins are able to leap almost ten feet out of the water and land safely onto rocks. They follow the sun from their breeding colonies to winter feeding grounds, travelling an average of 8,000 miles a year.

In winter, the sun doesn't rise south of the Antarctic Circle. If Antarctic sea ice decreases and does not extend far enough to the north, Adélie Penguins, during their winter migration, may not be able to reach the sunlight needed to navigate, hunt and avoid predators—they won't dive in the dark. Other threats are oil pollution, fishing and disturbance of colonies from research stations and aircraft.

Polar Bear
Polar Bears live only in the Arctic. Loss of sea ice has a critically adverse effect on Polar Bears. They hunt from the edge and build snow dens on the ice for resting and raising their cubs. Sea ice decline could open the Arctic to shipping and tourism, further disturbing Arctic habitats. Other threats are oil development and industrial pollution that reaches the Arctic through air and ocean currents. 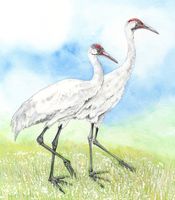 Whooping Crane
Before 1800 there were an estimated 10–20,000 Whooping Cranes in North America. By 1941, because of hunting and habitat destruction, there were fewer than 20. There are now approximately 350–380 in the wild. The wild Whooping Crane population has only one winter habitat—a wildlife refuge on the Gulf Coast in Texas; and one spring breeding habitat—a prairie wetlands in Alberta. Severe storms, sea level rise, drought, industrial development and oil spills threaten these habitats. Another significant threat to young Whooping Cranes is colliding with power lines in their migration corridor.

Tufted Puffin
Tufted Puffins are threatened by sea level rise and storm surges which destroy habitats and breeding areas. In some areas of North America warming seas are causing the fish that the Puffins feed on to migrate farther north, making it difficult for them to find adequate food. Other threats are entrapment in fishing nets, oil spills, pollution, ingestion of plastic, human disturbance of breeding colonies and introduced predators such as rats and foxes.

Hawksbill Sea Turtle
Climate change may affect Hawksbill Turtles in various ways because they live in different habitats at different stages of life: open ocean, beaches, lagoons and coral reefs. Rising sand temperature of nesting beaches produces more females and other abnormalities in baby turtles. Adults live primarily in coral reefs—threatened by rising ocean temperature and acidity. Since ancient times the Hawksbill has been exploited for its shell. They are also threatened from fisheries by-catch, development, and a high sensitivity to oil spills. The population has decreased by an estimated 80% in the last 100 years.
Adelie Penguins are effected by climate change because of:
Snow Or Ice Decrease